Famous and unforgettable, the Taj Mahal is grander and bigger in impression than all the pictures in the world could ever show. 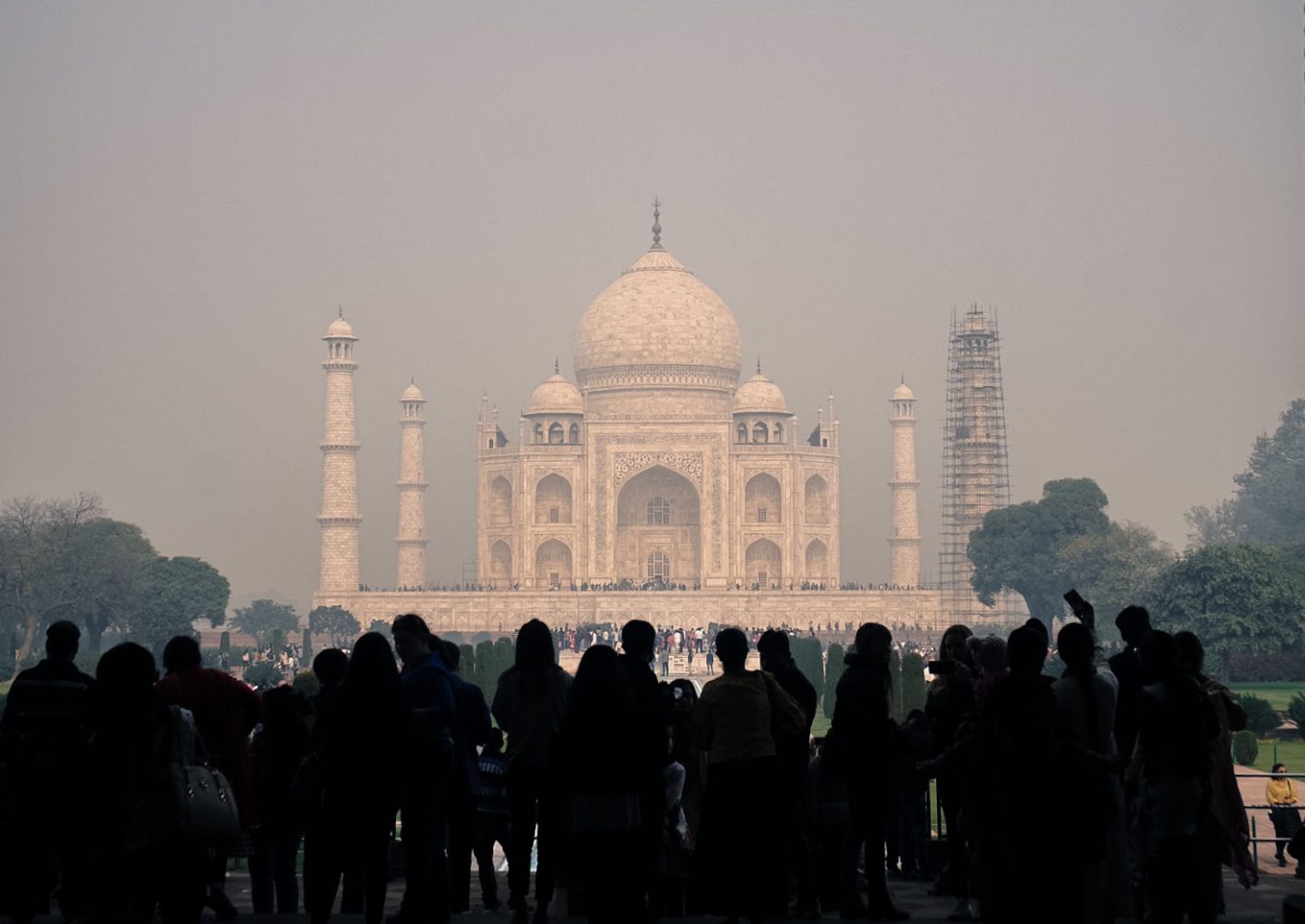 Go all the way to India and not make it to one of the New Wonders of the World, well that wasn’t an option, even if our time was limited.

Probably the most famous landmark in India, not to mention the world, the Taj Mahal tops most ‘must do’ lists in India. Normally one to steer clear of tourist filled locations, this was one I couldn’t miss.

And I can fondly say now, it was all worth it. 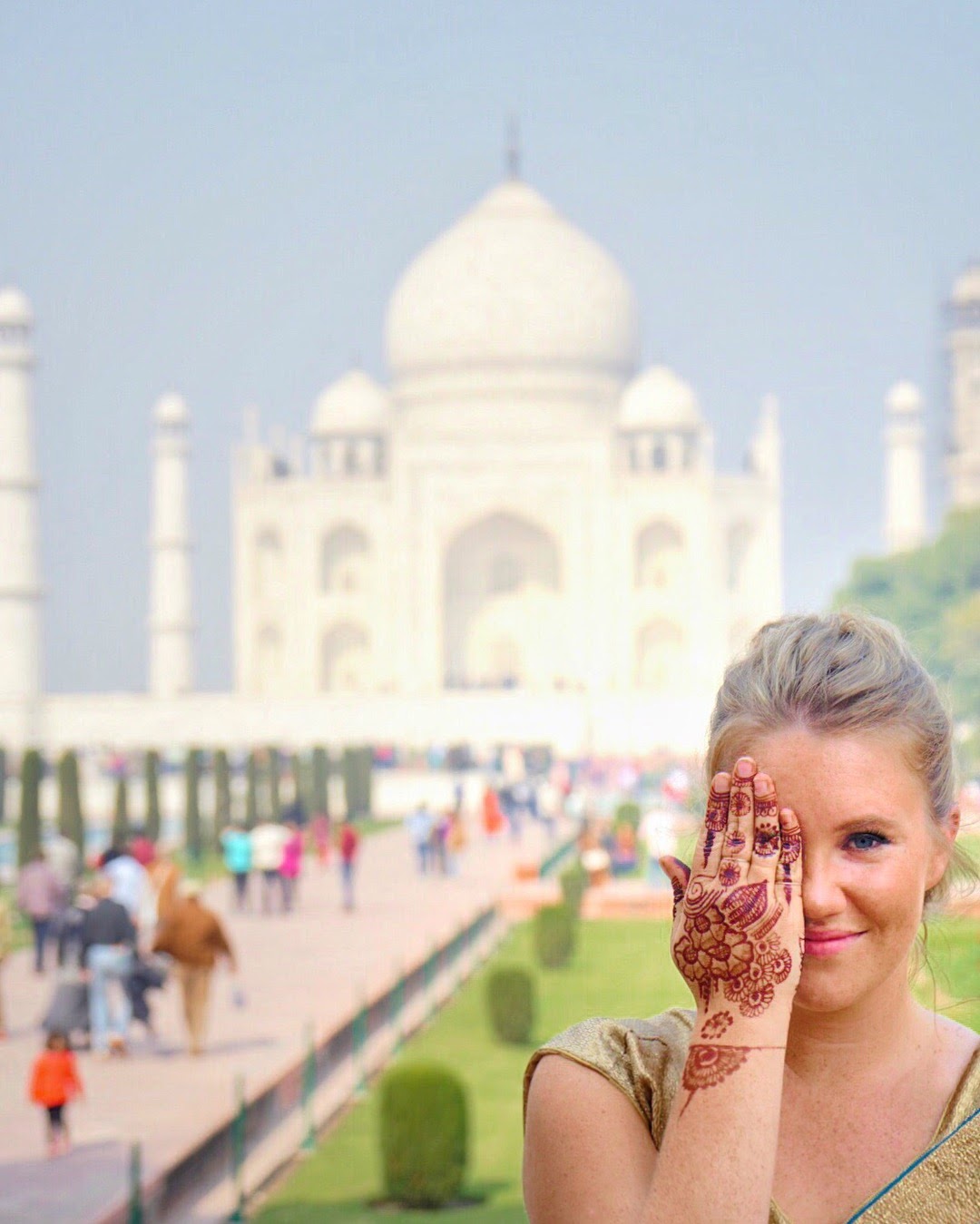 After a week of exploring Delhi, Jaipur and a few Indian wedding events, we were left with just one day to visit the Taj Mahal before flying back home. Only 24 hours! And boy did we used those hours wisely.

After hours (and hours) of reading, I was convinced I had to arrive at the Taj just before sunrise so I could see the beautiful structure in its purest nature, free of tourists. So after a little pushing, I ‘convinced’ my S.O. to get up at 2:30 am with me to make our way from Delhi to Agra in time for sunrise. We were attending a wedding the night before and therefore couldn’t spend the night in Agra. This also meant we weren’t getting a nice long sleep before getting picked up. More like 90 minutes, not to mention, in our wedding get up. 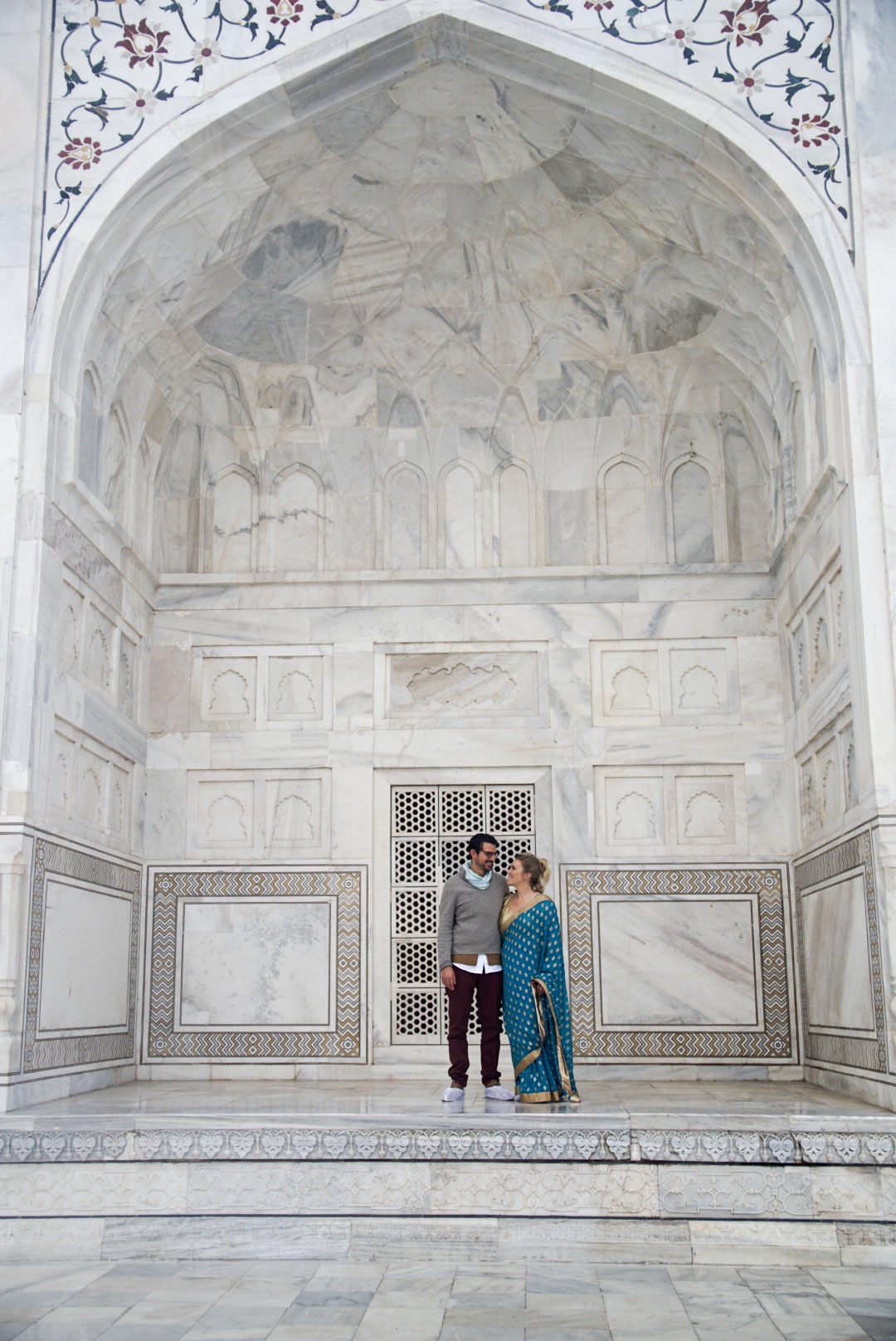 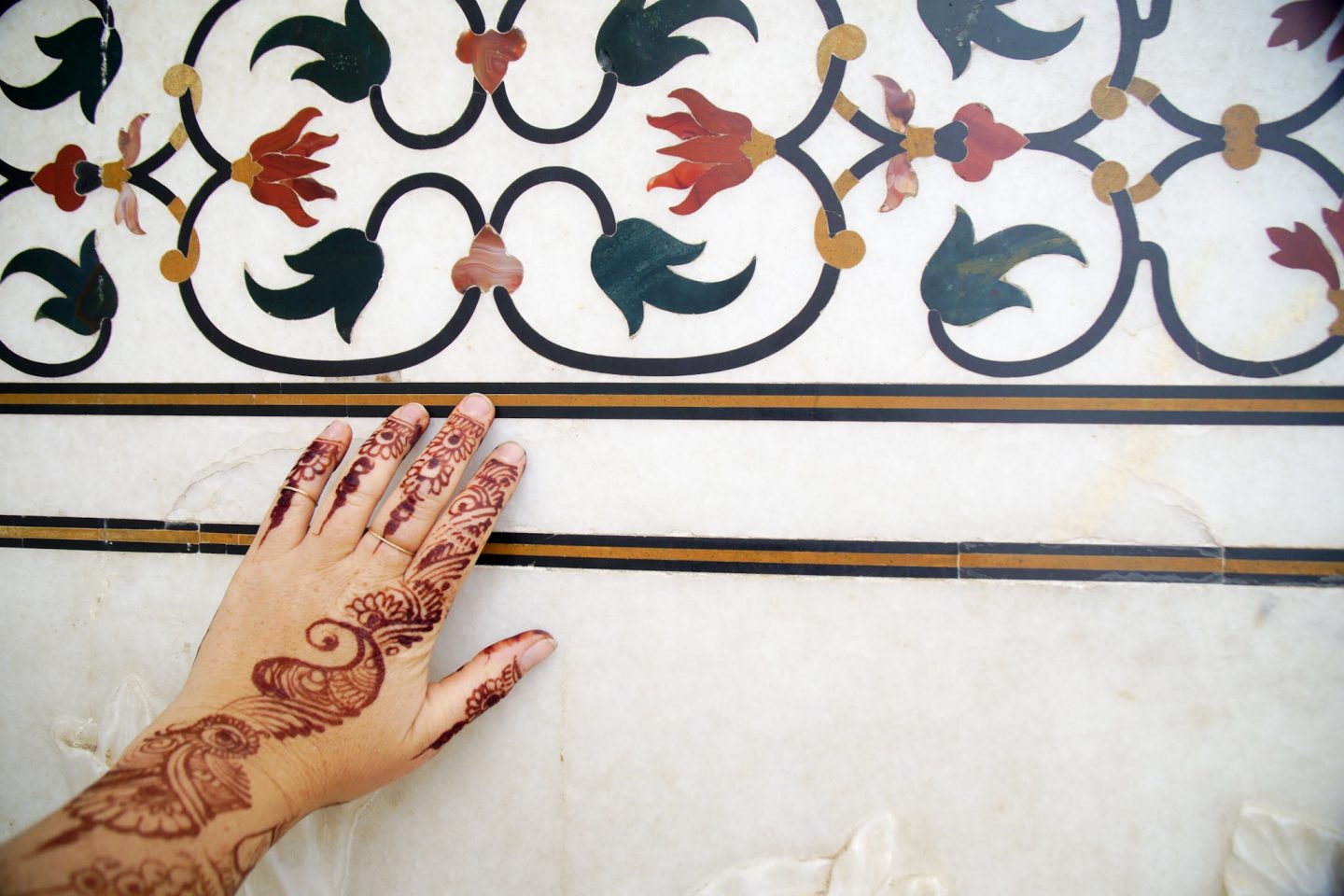 So the 3-hour drive began, which turned into four due to a thick fog covering the roads. We dozed off in the back, which now thinking about it was probably for the best, since the cars didn’t really change their driving habits even though they couldn’t see more than a few metres ahead. He was safe! But I never let the facts get in the way of a good story.

Meanwhile, I was still optimistic the fog would be gone by the time sun rose.

As it came up to 7 am I could see we were close on my GPS and we pulled over to pick up a man, to our surprise, our guide, which was included in the car rental.

Still hopeful for a quick fog burn off, we left our bags and valuables in the car, bought the tickets and made our way down to the east gate.

We were greeted with a big view of nothing, which was followed by a hit of disappointment to the gut! Had we trekked all the way only to find endless amounts of fog?! 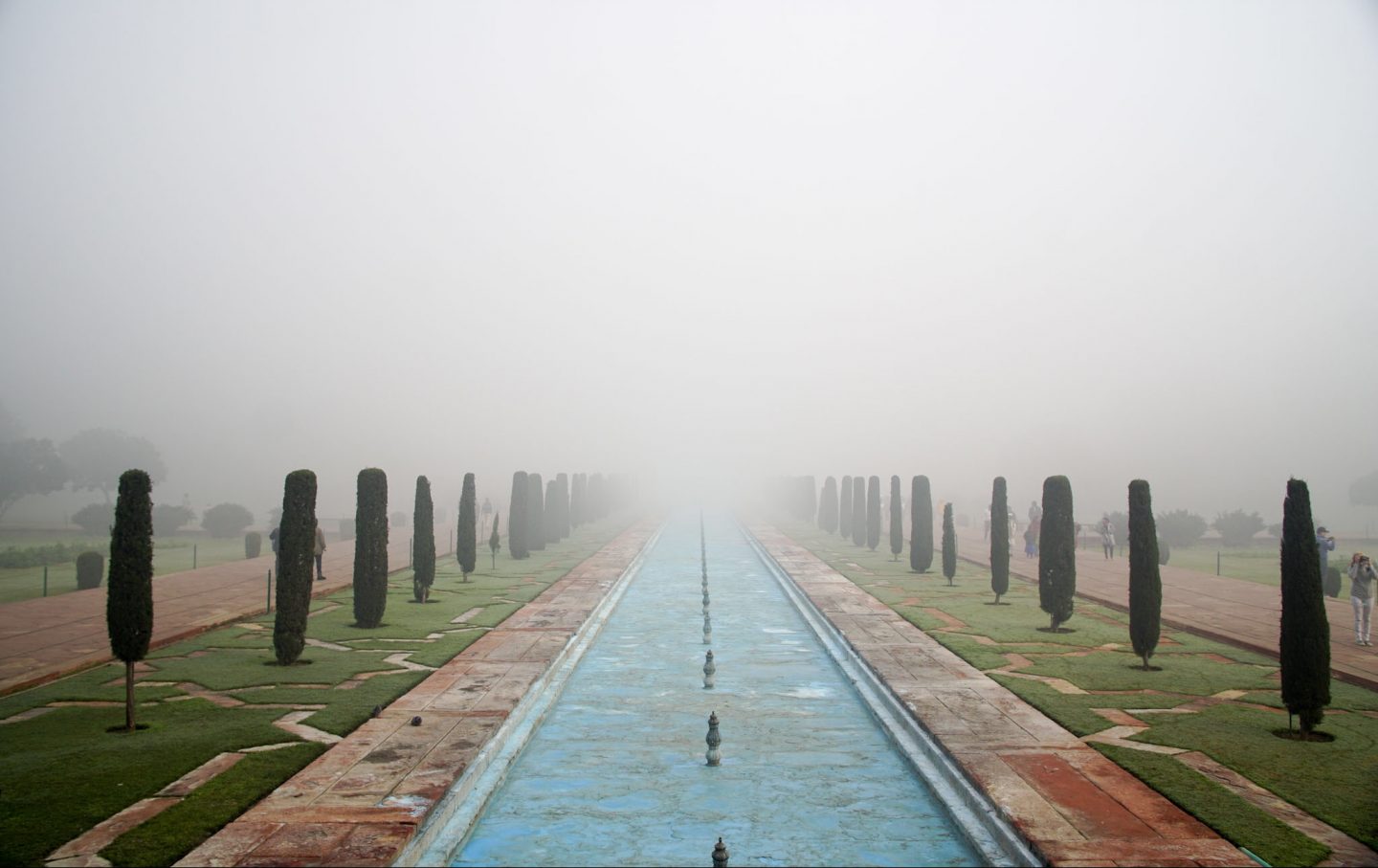 But, we had come this far and we weren’t going to leave and not experience what we could. So we did a tour around and inside the mausoleum and decided to go and explore the rest of Agra, grab something to eat and head back around midday with every hope the fog would be gone. And yes, it did mean paying for our tickets again.

The fog had gone when we returned and walking through the arches to reveal the perfectly symmetrical building (ignoring the scaffolding) was breathtaking. 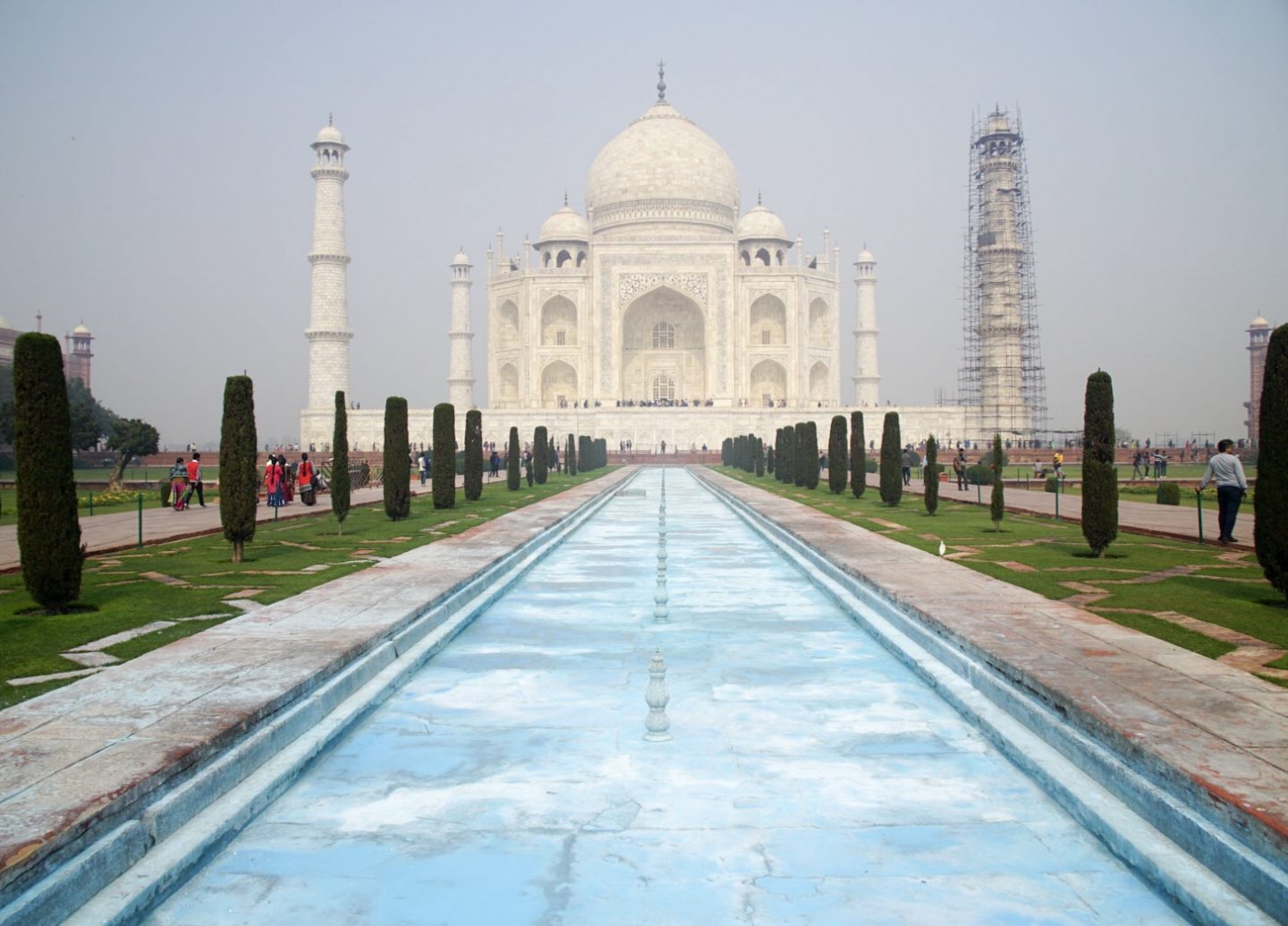 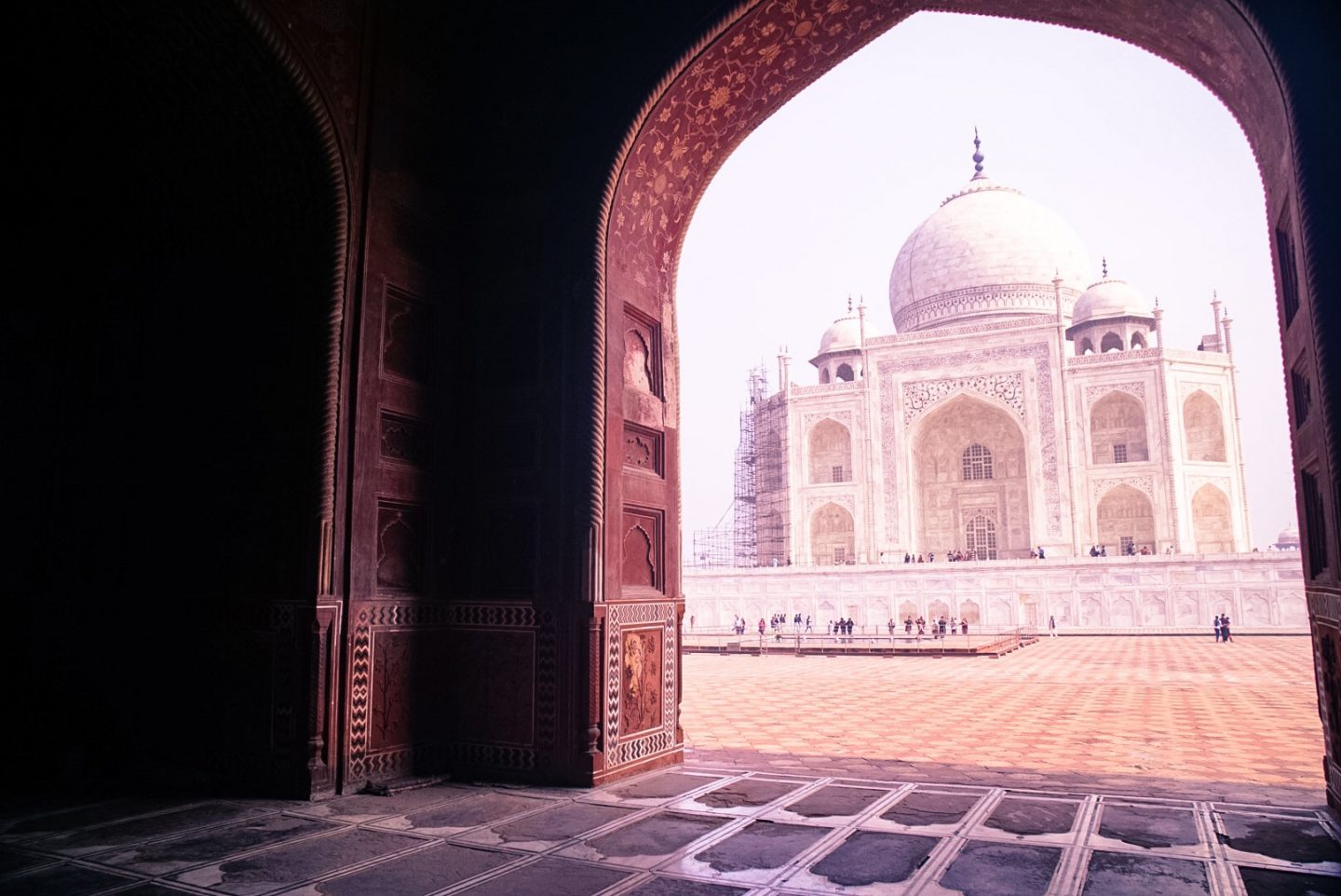 I was in awe pretty much the whole time and since we had already done our history tour early in the morning, we simply walked around, took photos and marveled at the beauty of her.

The Taj is open from sunrise to sunset each day except Fridays.

The grounds are only open to local Muslims on Fridays who want to worship in the Mosque. 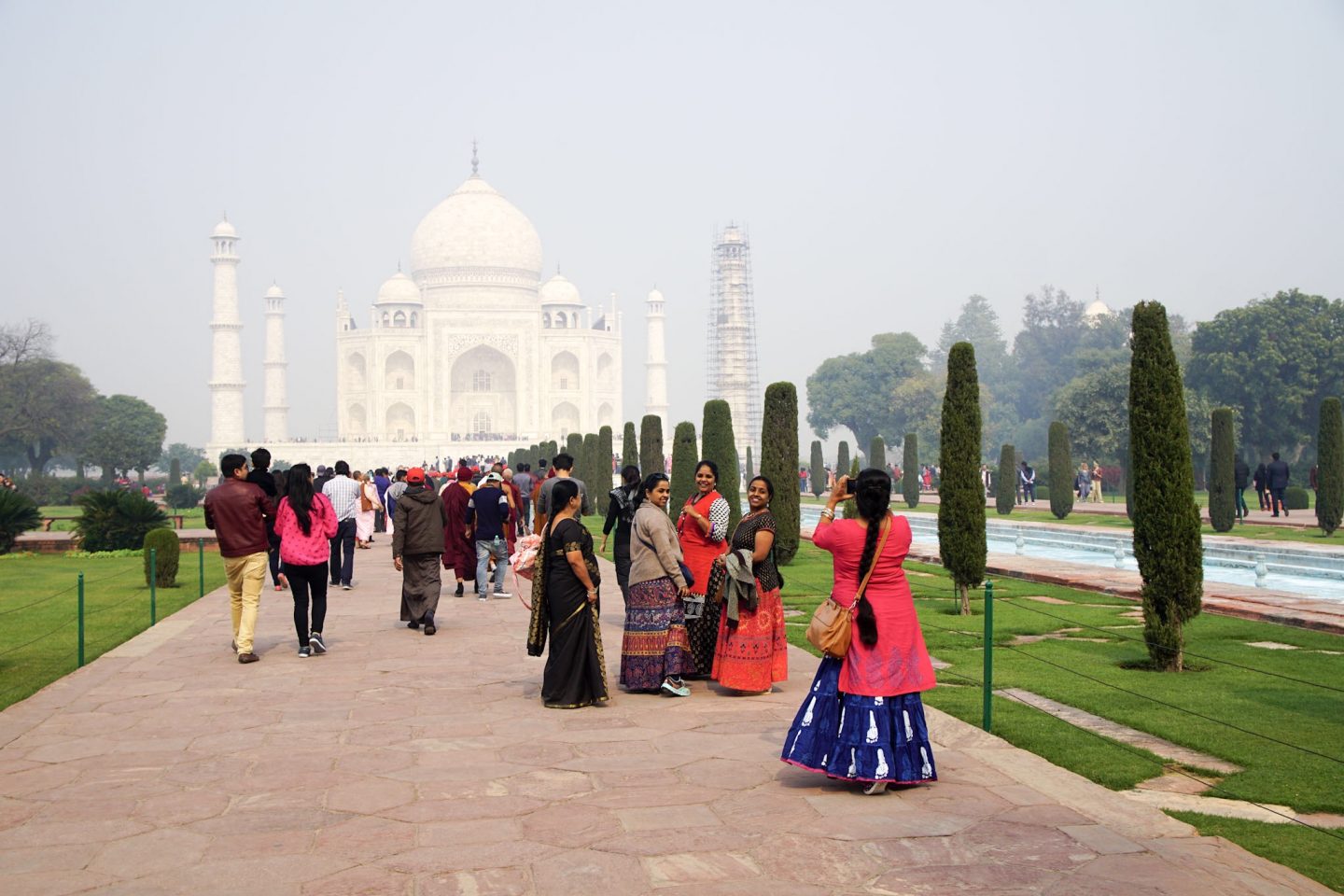 Tickets are 1000 RS for foreigners which is approximately $15 USD/ 19AUD/ $14EUR (this will vary depending on exchange rates at the time of reading this article. Just an FYI ). The price includes a bottle of water and shoe coverings, which you will need to enter the main marble structure so you don’t ruin the ivory-white marble.

What time to go

I went at both sunrise and midday due to the fog. It was pretty quick to get through security both times, but there were a lot more people vying for the perfect photo at midday.

If you are able to get up early and catch the sunrise, given it isn’t foggy, it is a treat to see the marble turn a pinkish hue – and you beat the crowds.

The intricate establishment turns a little yellow in by noon, milky white in the evening and golden at night when lit by the moon

There are three gates: The West Gate, East Gate, and South Gate.

We went through the East entrance on our early morning visit, which is less common and therefore, faster. But, it was also early morning and the shops hadn’t opened yet. We bought our tickets at the building and then caught a rickshaw down to the security line, but it also a very easy walk. Cars aren’t allowed within one kilometre of the Taj to avoid pollution affecting the marble. 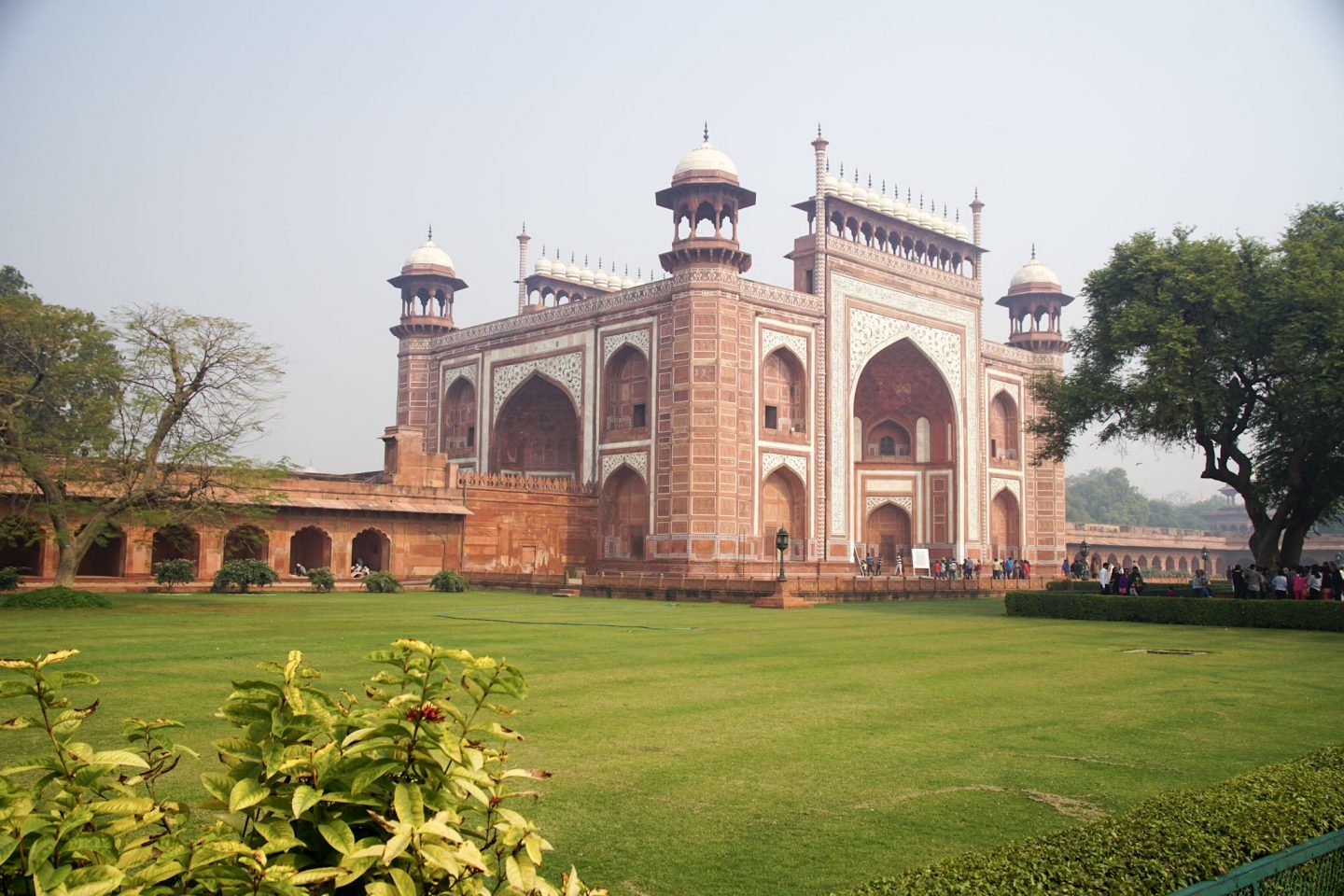 The main gate is the West entrance, which we came through around lunchtime and was much busier with lots of people trying to sell trinkets.

There are separate lines to get through security for men and women where you will get a pat down and put bags through an x-ray.

Pack as light as possible. Do not bring tripods, video cameras or selfie sticks (although I saw plenty of those). Cigarettes, sketchpads, and food will also not be allowed in.

And if you carry your camera around your neck you can skip the x-ray line. 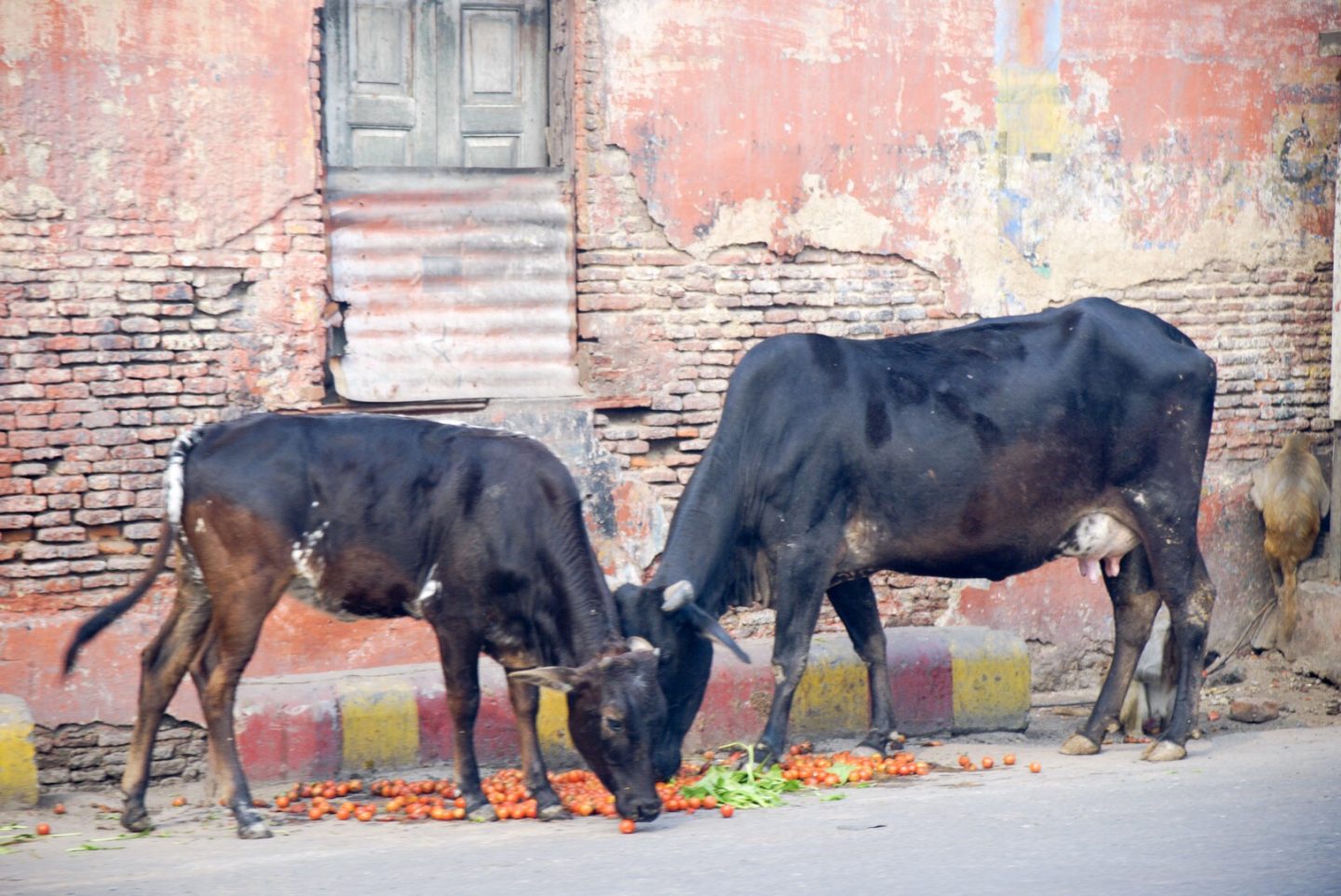 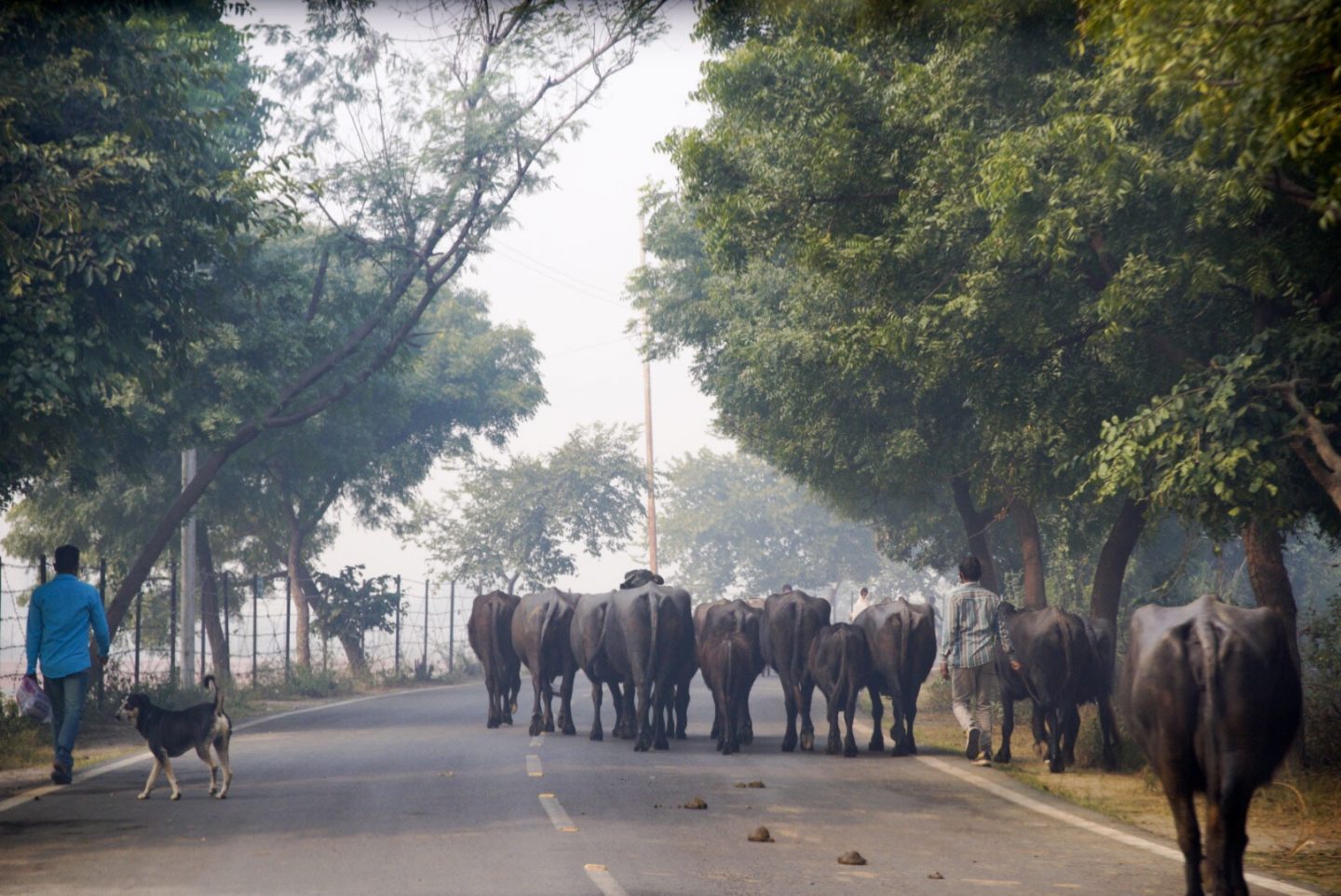 How long to stay in Agra

We didn’t actually stay overnight in Agra but that was only due to time. It isn’t highly regarded as a place to stay longer than one night. While there are a few other points of interests to see, two days and one night should be enough.

Funnily enough, one of my favourite things to see was on our way driving to Mahtab Bagh, the moonlight garden behind the Taj Mahal. As we drove over the bridge, I could see flashes of colour near the riverbank. The women were down there washing all their laundry and laying it on the ground to dry. I wish we had stopped to take a picture. 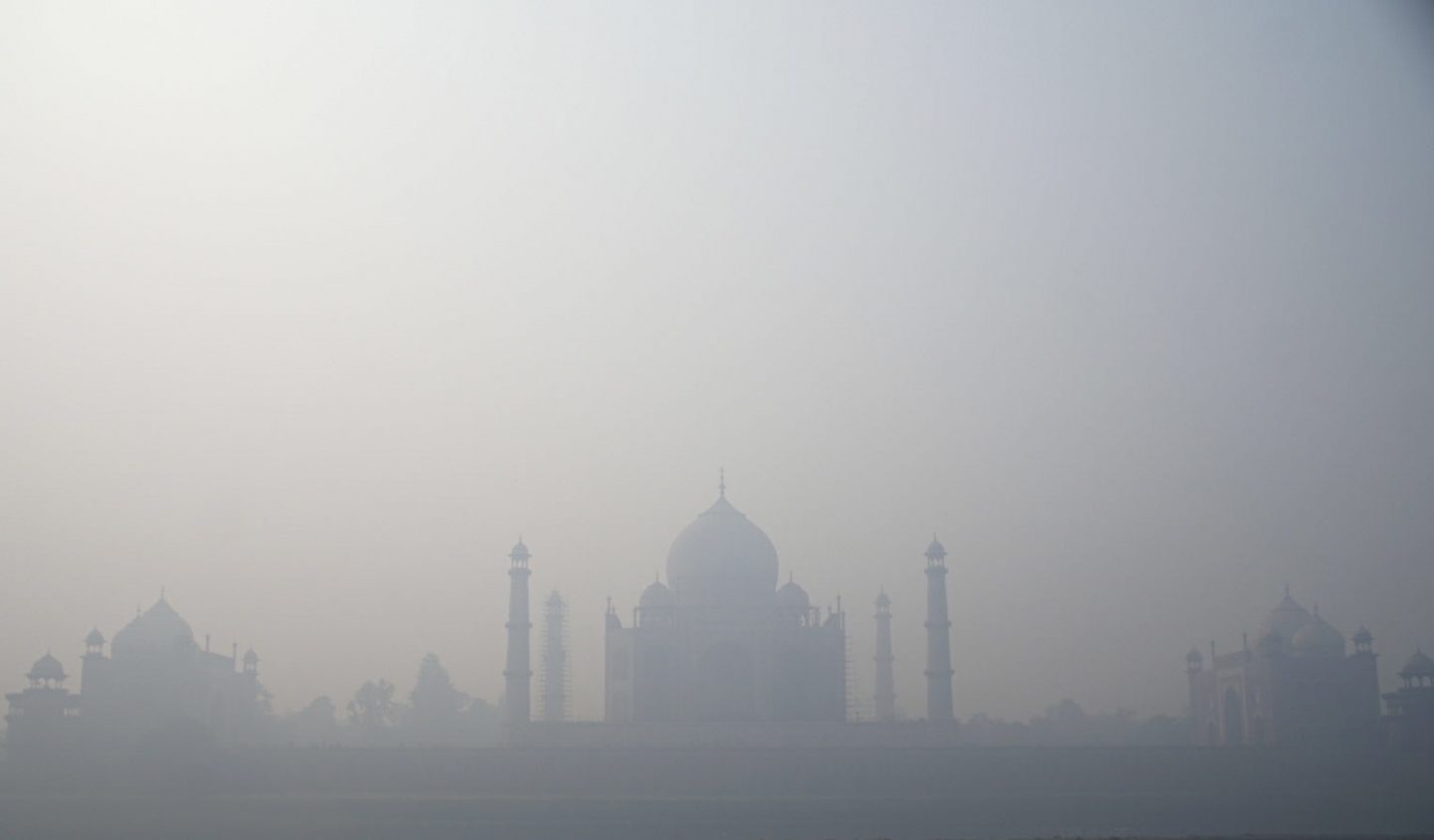 Should I get a guide?

We were completely unaware our private car service with Eco Rent-a-Car included a tour guide. In hindsight, it was pretty helpful having someone who spoke English and walked us through the whole ticket and gate process. Our tour guide was also great detailing the history and describing the intricate features of the Taj which gave us more meaning to the Wonder. There are lots of locals standing within the gates after security offering their services. They can be quite persistent so just be firm and keeping walking. 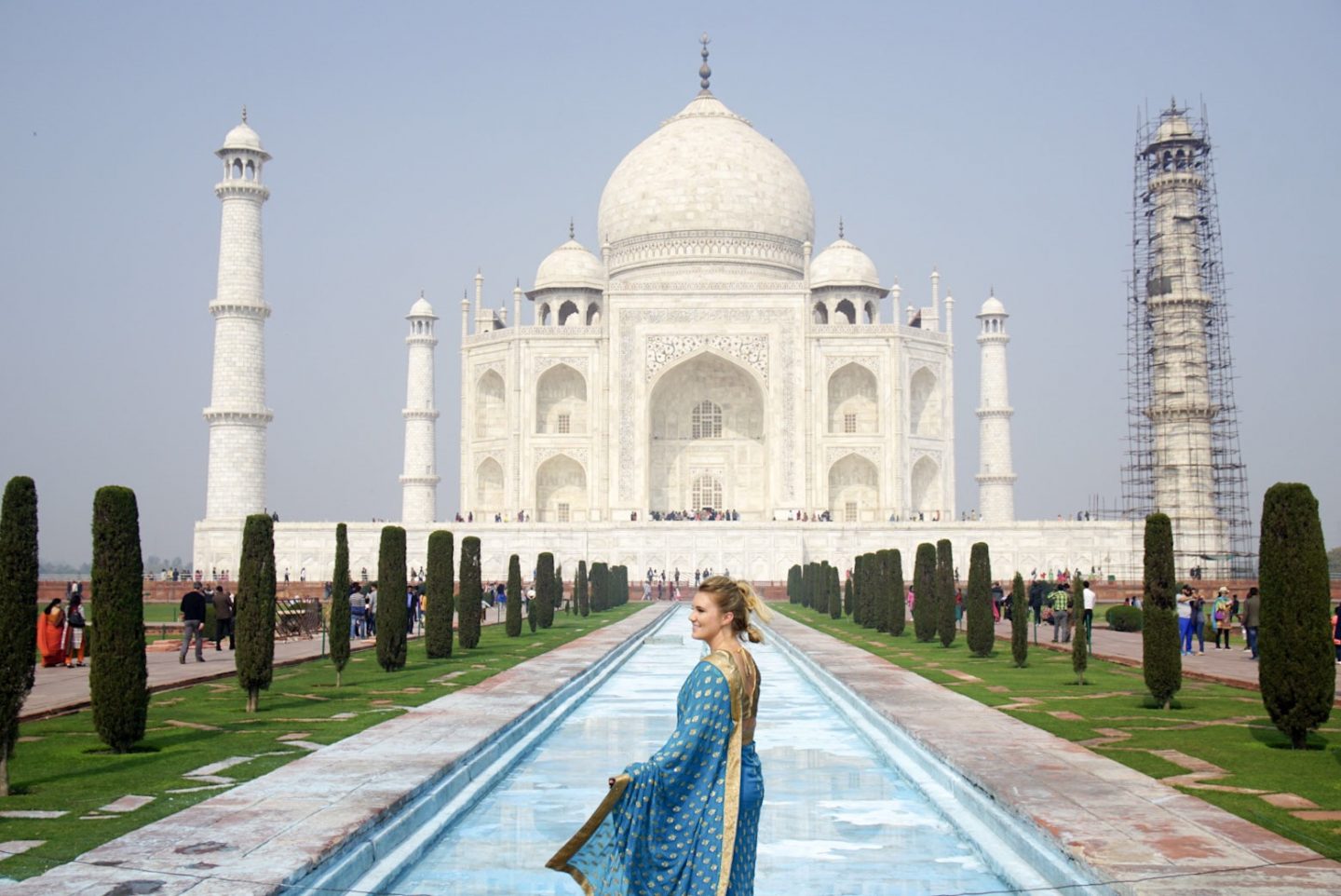 What happens when you wear a Sari?

We were still fully dressed from the wedding the night before so I turned up wearing my Sari. Somewhat used to the staring in other cities I guess due to my fair hair and skin, the addition of the sari was a whole other level. I had locals, both men and women, sneaking photos of me and asking to take photos with me. It was like I was a celebrity.