Many people I know who have visited Israel are more than happy to express their love and connection to the land. Whether it’s Jewish, Islamic or Christian, the conflicted country is the homeland for many around the world.

I signed up for a ten-day program in Israel, which I have to be honest, left me with high anxiety levels to say the least. A drastic change from my usual excitement I have for travel.

I was to fly with 40 of my peers where we would be taken around to see the historical, religious and cultural sites of the country and experience the Israeli way of life.

The clincher for me was the fact I was in deed travelling to the Middle East. An area of the world portrayed in the media as a battle ground rich with struggle and tension. As much as I tried to be open and uninhibited, deep down there was a slight feeling of worry.

I wondered how people lived their day-to-day lives

I really didn’t know what to expect

And although many people around me frequent Israel, I still imagined a very primitive land. Boy was I was put in my place the second I landed

Israel, a country responsible for one of the most efficient military forces, advanced technologies and cutting edge medical breakthroughs, is far from primitive

Yes they may adopt a more relaxed lifestyle approach but they do not ride camels home to their Bedouin tents.

The most important aspect of this trip was to clarify for myself the turmoil Israel experiences and how they manage it on a day-to-day basis.

I came to realise it is not always like we see on the news.

The most poignant thing that stood out to me was the patriotism that runs through their veins. It’s not even something I can explain by example but rather a feeling you experience, something you hear on the streets or something you see on their faces. Whatever it is, it is very clear that Israel is very special to many people irrespective of religion. 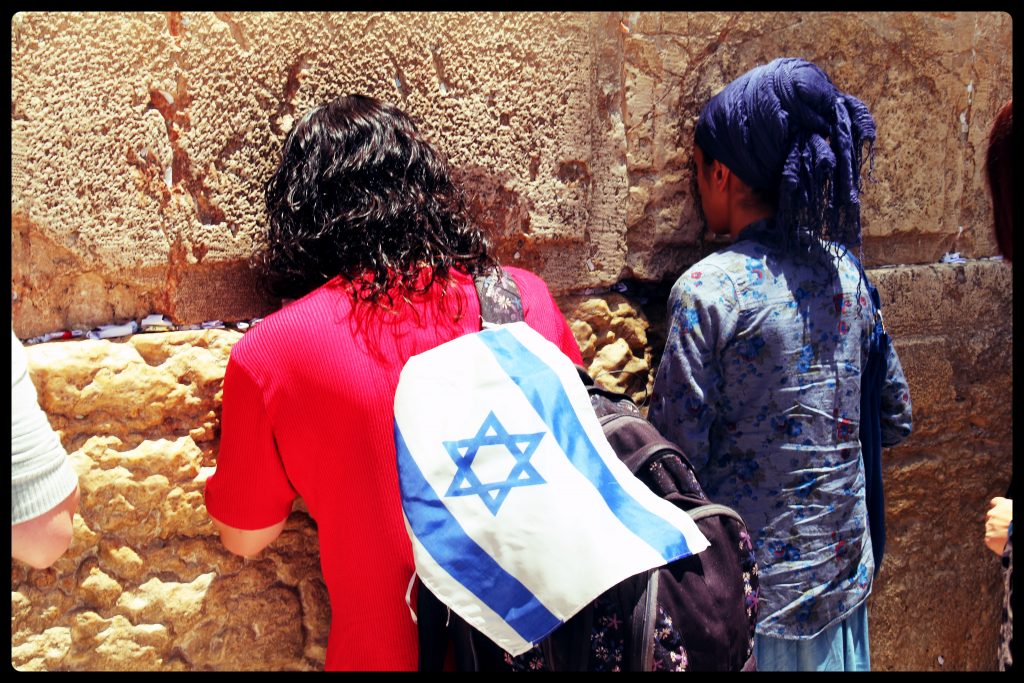 At first I was shocked to see the soldiers, both men and women not much older than 18 walking around with M16 rifles slung over their shoulders. I guess it became more of a reassurance once I got used to it.

Jerusalem, the capital, is also the cultural and political center of Israel. It is heavily rooted in history and religion and paved together like each cobble stoned street leading to the Western wall. It is where the old meets the new.

Venturing into the old city is a cultural explosion, divided into 4 quarters, Jewish, Christian, Arab and Armenian. They each have there own remnants of history that make up the building blocks of the city. Hesitantly deciding to explore the Arab quarter with a couple of friends, I immediately found myself at ease and wandered the indoor street bazaar. It was filled with locals selling ceramics, jewelry and everything in between. 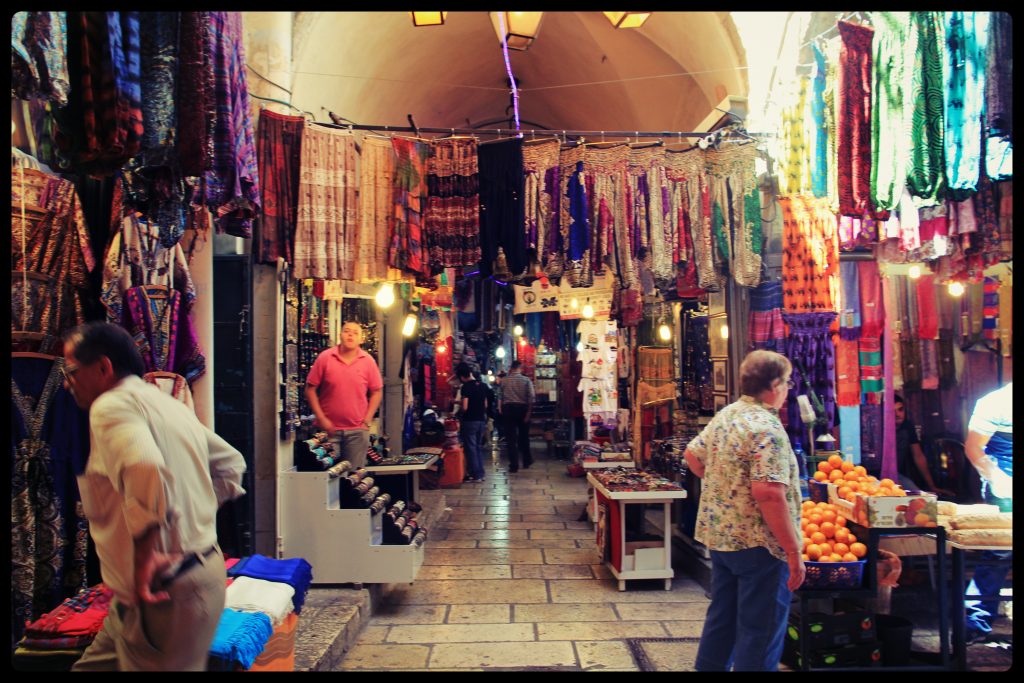 Tel Aviv is to Israel what New York is to the US: A city that never sleeps, the financial hub and a culinary experience. This is the place to be if you want long days on the beach, amazing restaurants and wild nightlife. The vibe is buzzing in this demographically and historically young city. At only 100 years old, the median age is 28 years old. This is reflected in the culture and dynamic atmosphere. I have often heard the term eye sore when referencing Tel Aviv, which to a degree I can understand with graffiti tags and construction layering the streets. With that being said you can walk around many suburbs and admire the Bauhaus influenced architecture introduced in the 1930’s.

Resting on the southern end of Tel Aviv is the old city of Jaffa, one of the oldest port towns in the world and home to the best Hummus restaurant in my opinion. There is no mistaking the Middle Eastern vibe in Jaffa, with stone labyrinth alleyways and amazing ‘on the street’ bars and restaurants.

If there is one thing these people can agree on, it’s Hummus! The unofficial national food Israelis go crazy for and almost a symbol of co-existence of Jews and Arabs. For hummus virgins, it is basically made out of chickpeas with a bit of tahini, garlic and lemon. It’s healthy and very simple to make. Yes homemade. It can’t even be compared to the tubs from the supermarket.

FACT: An average Israeli consumes about 10 kg of hummus a year.

Abu-Hassan, the best Hummus in Jaffa, maybe even in Israel has been serving hummus for 40 years. Unlike at home, hummus is a whole meal eaten for breakfast, lunch and dinner and this is the hummus worth waiting in line for. Arrive early because it is made fresh daily and once it is all gone, they close.

I was quite skeptical when our local Israeli friend took us for breakfast! I didn’t know if I could handle hummus that early in the morning. But we got a seat straight away and I guess ‘when in Rome’!

If you are lucky enough to get a seat, the atmosphere is noisy to say the least. There are men yelling in Arabic, rushing around bumping into each other with plates. It’s fantastic. A very simple menu, the hummus is served warm with unlimited pita so soft it’s like marshmallow. You can either get plain hummus or ‘Mesabacha’ which is complemented with creamy eggplant, paprika, olive oil and chickpeas on top. All dishes are served with fresh raw onion- some of the sweetest I have ever tasted. I never thought I would be dipping raw onion in the hummus and eating it like an apple but that’s how the locals were doing it so I did too. 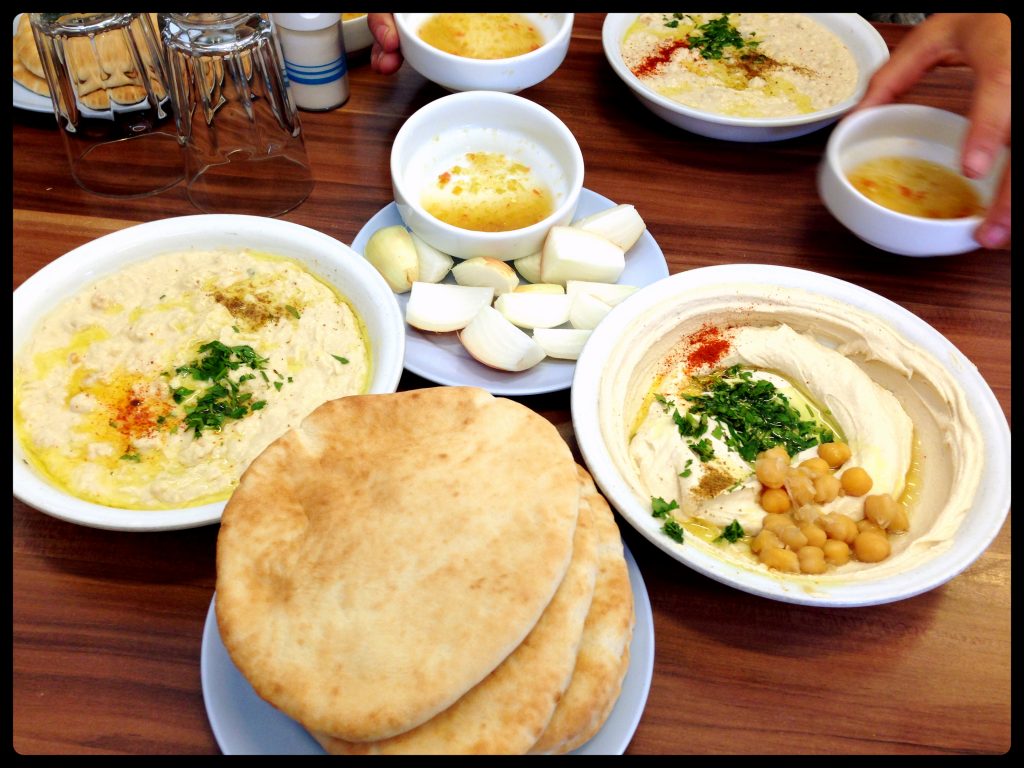 Word of warning! You will want…need to nap after all that hummus

You may not be able to read Hebrew after a couple days in Israel, and the accent is one of a kind but here are a few words to start you off.

What is your name? = eych korim lacha?

How much does this cost? = kama ze o’le?